Changing the way we do things is always a challenge. Sizing up the best thing we can do to solve a problem isn’t easy. If we make the right choice and have the solution in mind, the rest should be easy. But, it isn’t.

The moment of change is when we bump up – hard – against vested interests. There are many of them and sometimes they don’t play fair. They play for keeps and they offer no apology. 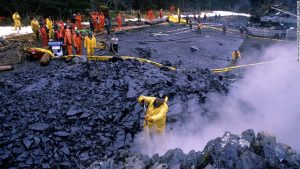 Think for a minute about a casebook example of capitalism, the colossus of the energy industry, ExxonMobil. It’s annual revenues exceed the gross domestic product of all but 30 countries.[1] It is a corporate behemoth, a cash cow, a shining example of all that can go right when you know how to play the game and play it very well.

Let’s put the company in perspective. Encase it in parentheses. Let Valdez and Deepwater be the bookends. Not a pretty picture, you think? Disasters fore and aft. Hah! 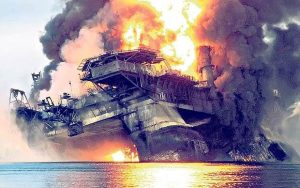 What happened to ExxonMobil between the time it soaked the Alaska shoreline and all its resident creatures in oil, and the time it chose to point its fat finger at its partner, British Petroleum, when 11 of its workers died in a drilling rig explosion and oil gushed into the Gulf of Mexico for nearly three months, must give us pause.

Rather than be humbled by those $multi-billion fiascos, Exxon made so much money from its petrochemical businesses during the intervening decades that calamities for the rest of us were a mere nuisance to them. A public relations challenge. A rounding error!

How it spent that money was more telling. Between the time those catastrophes occurred, ExxonMobil was concerned with paying handsomely and deceptively to “disprove” climate change. It paid a very pretty penny, chump change to them but enticing enough to their minions in the research community, for scientific studies refuting the notion that carbon discharge is poisoning our atmosphere, even though it’s own internal studies going back to 1970 reported otherwise.[2] 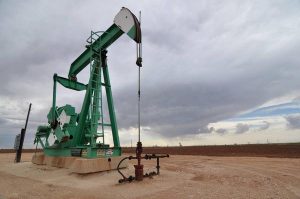 The oil & gas industry has fueled the growth of the world’s economies and vastly enhanced the quality of life that its people enjoy for nearly two centuries. That a burgeoning population and the toxic consequences of trying to serve them all by burning fossil fuels has become a global problem is nothing to be ashamed of; rather, it’s a time to recalibrate one’s business and bring one’s resources to play in solving the problem.

Rather, Exxon Mobile chose to use its resources to mislead and deceive us by underwriting phony “scientific” studies. Money can’t change the truth, but it can make finding it a lot harder.

Self-interest, of course, is the basis of capitalism. Nothing new there. But what is galling is the extent of public subsidy they receive and the very modest amount of tax they pay for the profits they realize. And keep in mind those “studies” were a tax deductible expense. Money covered by the taxpayers among us. How do you feel about paying to deceive yourself?