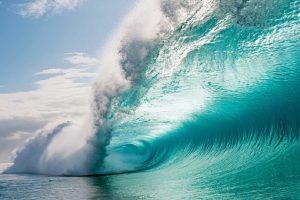 Some fifty miles off the coast of Cascadia, miles below the surface of the Pacific Ocean and only 10 minutes ago, pressure built up between two massive tectonic plates over more than 300 years finally gave way. Along a 700 mile fault line, the Juan de Fuca plate slipped a few meters beneath the continental shelf, setting off one of the largest, most powerful earthquakes in history, of 9.5 or 9.6 magnitude.

Long stretches of the coastline dropped five to ten feet, flooding the land and causing major damage. Like the rest of Cascadia, the destruction from the earthquake was widespread. Homes, shops and businesses were damaged or destroyed, roads ruptured, bridges fell into rivers and ravines, landslides covered large swaths of the coast.

That was before the tsunami. Deep in the water offshore, along the fault line, the force released by the shift in the tectonic plates sent a jolt of energy up through the water that spread in all directions.

Shortly after the earthquake ended, maybe 5 or 6 minutes later, a wave traveling beneath the surface at nearly 500 miles per hour begins to lift as it nears the shoreline, slowing and rising in a wall of water in some places 100 feet high when it slams into the coast.

15 hours later, as it did in 1700 when the subduction zone last ruptured, the tsunami traveling west will hit Japan. They at least will know it’s coming and they already are better prepared.

The waves as people might imagine them were not to be. These are not the breakers that surfers ride, those elegant crests of water curling into the air and running dramatically to shore. Rather, it is as though the entire body of the ocean lifted up 100 feet above its normal level and moved inland en masse. The water when it came just kept rising, drowning everything in its path.

When it hits Cascadia, it will obliterate many places along the coast. Towns like Seaside, Oregon, a municipality of some 6 square miles where 6,500 people reside at 12 feet above sea level, simply cease to exist. Everyone there likely is killed, most of them washed to sea, never to be found. At Cannon Beach and Manzanita, the commercial areas are washed away and low lying homes obliterated.

Other towns along the coast suffer somewhat less egregiously, but all of them are severely damaged, some nearly destroyed. It is the beginning of the high season. Tourists in motels and guest homes hard by the shoreline are killed by the thousands as the giant surge of water pounds the coastline.

The Oregon coast is especially hard hit. Many of the homes and other buildings near the shore were badly weakened by the earthquake; when the tsunami hits, many of them fall into rubble, much of which is carried away as the tide recedes. Bodies of the drowned, those killed by being slammed into walls, rocks or trees, and those crushed by collapsing buildings, float amidst the debris that covers the ocean for miles out to sea.

For those who have survived, those who still are fit enough to flee, once they have regained their senses quickly realize there is nowhere to go and no way to get there. All access in and out has been sealed off and lost.

Center for the New Northwest