We have spent a lot of time and energy, yours and ours both, in arguing for a simple and equitable tax policy that will serve our society far better than what we have now. People tell us it’s complicated. Not that easy. Our efforts are appreciated, of course, naïve though they may be. But, really!

Taxing assets, people say, will crater the market. If Elon Musk had to pay tax on his increase in assets last month, when in one day he gained $30 billion, selling half that much in stock to pay the bill would sink his company. So we’re told.

Why not we wonder deed over that amount in stock to USG instead? Pay the tax with the asset in kind. Let society itself become a shareholder as an aspect of our social contract. Goldman Sachs already controls the Treasury Department. There’s no reason why they couldn’t manage those assets for our benefit.

Wouldn’t it be a positive change if all of us had a stake in the stock market? The real estate market? All those cryptocurrencies? Growth in American riches actually might extend to all Americans. Wouldn’t we then have good reason to admire those skilled practitioners of free enterprise? Those few people among us who make money hand over fist. Not because they are rich, but because they reinvest a portion of their wealth in the society that supports them.

Yes, it is difficult to wrestle with these problems. They are no small matters. They are of a scale that causes eyes to glaze and breath to shorten as we contemplate them. Maybe it’s better just to let things continue as they are.

Fortunately, our continuing, undaunted, and determined search for clarity in defining these possibilities finally has uncovered the sort of holistic, intrinsically flexible service required to tackle these sorts of issues. Many and varied are the answers available here. Delivered with absolute transparency. Apparently, you can have it all. 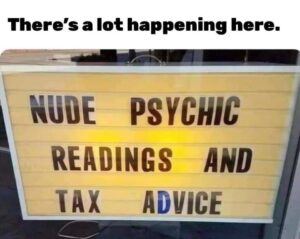 What we realize, of course, when we contemplate how deeply dug in the current system of tax and spend is, who gets dunked and who gets the donut, is that some people profit mightily where the rest of us get soaked. We all have heard about the top one-tenth of one percent where the wealth is concentrated. That they don’t pay any taxes, or precious little as a percentage compared to what we commoners pay, while their assets continue to accumulate. That unfettered capitalism is their passion, perhaps even their religion, and their belief in how deserving they are of its benefits is without doubt or shame.

When they blithely turn a blind eye to the homeless, the hungry, the ill, the absolutely destitute; when they in fact value that state of squalor for the incentive it provides the rest of us to be thankful for whatever work we are able to find, no matter how demeaning the job and meagre the pay; when they promote the belief these things are inevitable and they, the exalted capitalists, know best because they are rich and what is a more meaningful proof of worth than wealth, we might not be surprised.

But when the machine of commerce finally has come to threaten the very earth where we all live, and the cataclysm of climate change no longer can be ignored, or hidden from in some luxe place above the fray, and still they focus on the dollar, we might begin to wonder just how much longer we will continue to accept the role they have created for the rest of us. 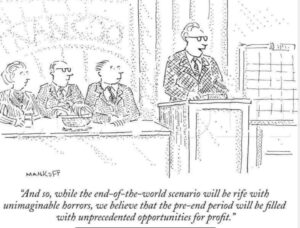 But what about the rest of us. We live in the rumpled lap of very tenuous comfort financed by credit. Credit at truly usurious interest rates. The majority of the American public cannot produce $400 without borrowing it. Think about that. Think about students who pay double-digit interest rates to banks on risk-free loans guaranteed by the Federal Government. Think about a standard of living that has declined for the vast majority of U.S. citizens in the past 50 years, a middle class that is less well off than it was in 1972, and a state of poverty that ensnares more people this century than the last. Think about the current generations of young Americans whose prospects are nowhere near as promising as those of their parents.

Is it possible that all this results from a system that has been exploited to the greatest degree possible by the fewest among us? That those masters of the algorithms have reached a place where they no longer can explain away the flaws of a system that benefits the very few at the cost of the many? That our vaunted free enterprise system has exhausted its ability to milk more lucre from the mass of our citizens. Is it a rubber band stretched to the breaking point? The froth in our overpriced cappuccinos? The very tip of the swirl of cream in our Dairy Queen cone? 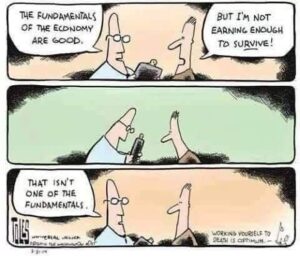 What are the fundamentals of our society and the way it supports itself? What is it now and what could it be if we have the courage and the vision to change it? Let’s consult the nude psychic and get some advice. What say?