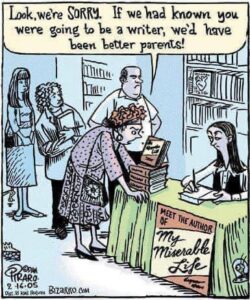 Life as an artist. A career in the arts. It’s a passionate need for self-expression and a challenging way to make a living. Like most areas of enterprise in a capitalist system, a few people make a lot of money and most everyone else barely gets by.

Employment for artists is an ephemeral thing, a fleeting moment of compensation between long stretches of paucity. There is precious little about the career of an artist that is certain and little that can be depended upon except that persistent uncertainty. The satisfaction comes from being yourself, doing your thing, giving it your all.  It usually doesn’t pay very well nor very consistently.

Most artists who need a regular income take refuge in academe where they can ply their craft intermittently between grading papers and kowtowing to department chairs at interminable faculty events. Some of them actually think it preferable to starving. It may be.

Whatever other skills an artist must master, learning to hustle is one that has value. Even that pure practitioner of whatever the art has to scramble after every opportunity to find a few that work. A few that let you work for them, that is. And pay you for it. 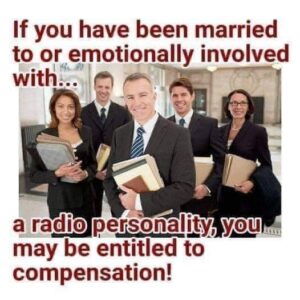 We’ve been interviewing artists who plied their craft on radio back in the day when a modicum of freedom to express oneself, and sometimes even a huge helping, could be had. A place to do what they were good at and share what they knew a lot about for an audience hungry to hear it. Deejays or radio personalities is the common term for the work, but these weren’t common people and their work was broadcast artistry of a sort seldom encountered.

This was a time when a new kind of radio show was being created, new music being played, a new audience being served. The personality of the station itself was defined not by the usual uniformity of the broadcast medium but by the variety of the people working there who were fully free to express themselves and their particular taste in music. At a time of insistent homogeneity in the media, it was a large helping of diversity in what was played and who played it. The spectrum of what they brought to the audience was soulfully wide and deep. The loyalty it earned them was unprecedented. It was brilliant while it lasted but barely a decade after it was founded it was gone.

Artistically, it was very satisfying for the performer. Financially, it was marginal at best. Security was somewhere south of nonexistent. Jumping from one station just extinguished to another being birthed of desperation was the typical career path. A gig that lasted more than a year was a rarity. Two was astonishing. It was a gypsy lifestyle.

Thom Trunnell was one of those artists. One of the best. He was working at a Top 40 radio station in Salt Lake City and listening at home on his stereo to music that was much better than what he was playing on his show. “This is the kind of music I want to play,” he said, and set off in search of a station where he could.

Thus began a journey, a career path, that exemplifies exactly what we mean by uncertain. A life on the move from one station to another, maybe a dozen or two of them in all and many for less than a year before moving again. More than a few stretches of unemployment or contract work doing production while chasing the next radio gig. They were brilliant often but temporal always. “Ever since I can remember, I wanted to be me,” he said. “I didn’t want to grow up and get a job and be some money-making machine kind of person.” He was able to accomplish that.

Freeform radio was just coming to be. At KMPX in San Francisco and WNEW in New York, an alternative to Top 40 radio was taking root on the FM band. A place where the new music could be played. Bands like Jefferson Airplane, Sons of Champlin, Tracy Nelson and Mother Earth, the Grateful Dead didn’t do “hit” songs, those nifty tunes of less than 3 minutes that slipped in neatly between screaming deejays and shrill commercials. The new music needed space and dare we say a little dignity to be presented properly, respectfully, in a way that a hungry audience wanted to hear it. Like those two pioneers of freeform radio, a few stations here and there cautiously began to give it a try. And a new breed of people came along to staff them. 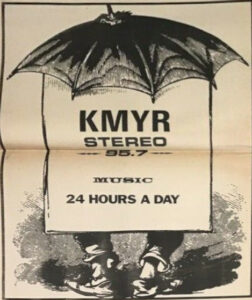 Thom got his first chance in 1969 at KMYR in Denver, where freeform radio was tentatively taking hold. His ticket out of Top 40 was his production skills, the ability he had to skillfully create station IDs, promotional pieces, and ads that were nearly as creative as the music. That was another aspect of the atmosphere freeform wanted to develop. For Thom it was his key to the kingdom and a meal ticket for many years after the kingdom was felled by Philistines.

He was there long enough to become program director and long enough, too, to be fired when Doubleday decided this crew was a little too over the top for a corporate entity. All in less than a year. From there, he and some of the staff went to WLS in Chicago, which was much better pay but much less freedom, being a station in the thrall of union jobs like cueing up the turntable. How many hands does it take to play a record? Still, with their help he played whatever music he wanted.

That one lasted just long enough to piss off Paul Harvey, he of “the rest of the story” and long enough, too, to be recruited to a thankless and ultimately failed position as program director riding herd on the political radicals who had taken over KMPX in San Francisco, from whence he was fired for too much or too little radical fervor, it wasn’t clear which. But fired he was in less than a year.

He dropped by KSML in Lake Tahoe, the secret mountains laboratory, but they didn’t have a place for him, so almost as quickly as it all had started, the end seemed to be at hand. Then, kismet came calling.

Two colleagues, Brian Kreizenbeck and Herb Neu, separately, had been in touch with a guy in Denver named Joe McGoey who had recently bought a radio station and was losing his ass. With Thom in tow, they paid another visit. The message was simple. We have people who know how to do this. They’re ready to go. Let us program the station, we’ll work cheap, and when the money rolls in, we’ll share in the profits. Joe said, “Do it,” and off they went.

KFML AM & FM in Denver lasted only a little over two years in that original format, but it was perhaps the purest example of freeform radio ever created, and it was wildly (ahem!) successful, too. Within a few months, the station was billing $30,000 a month, the audience was huge and growing, and the station among 40 some competitors in the Denver market was making serious inroads into the ratings.

There’s so much to say about that station and the people who made it happen, as well as the folks who eventually brought it down, but that’s a story to be told in detail later. Suffice it to say that more brilliant, flat-out balls to the wall creativity happened there than in all the rest of Denver broadcasting history.

For Thom and the rest of the staff to one degree or another, it was the pinnacle of what they always hoped to do on the radio. Thom went on to work at any number of other stations, most of them for barely a year or two, but he’d been to the mountain top and all the rest were one level or another of radio deep in the valley, sometimes even the pit.

When we asked him recently what he remembered about KFML, he had plenty to say, but one comment in particular seemed to sum up what an artist at play in the fields of freeform radio wanted from the beginning to accomplish. All the effort, all the shows, the ups and downs of having the chance for once to freely express yourself to a loyal and attentive audience, really came down to this:

“How much fun it was,” he said. “How pleasing it was to have people respond in a positive way, which they did a lot. Hardly anybody said, ‘well, you suck.’ Nobody ever said that. Sometimes I told a story, sometimes I expanded on a theme. There were no definite guidelines. Do what you do and make it happen, and it happened in a lot of different ways.

“Every day at that studio was pretty swell. I’d say, ‘I can’t believe somebody’s paying me to do this (although not very much).’ Mostly there was the music. That was the freeform approach. That’s what we all wanted to do. Basically the idea was to be in this room where any song you could think of was available. You could just jump up and play it. The song you were playing would remind you of another one. They’d both be there. You’d do a snappy segueway and the mini-orgasm would continue. That was the basic idea. That’s what we did and people seemed to like it. In a way, it was kind of the realization of a life’s goal.”