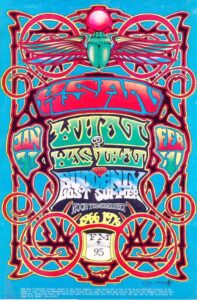 Maybe again. That’s what we were thinking when we considered the subject of this particular article. Maybe we can write about our freeform radio project again. We’ve been at it for a while now and haven’t been especially shy about sharing the experience with you. There’s that. Then, too, we don’t want to overstay our welcome.

The two words that title this post can be read to suggest there may be a gain. Yes, we have gained a tremendous amount of understanding about the subject of freeform radio. It’s a project that has brought us no end of pleasure and satisfaction. The deeper we’ve gone into the venture, the more important – even profound – it seems.

Because it’s not really about radio, freeform or otherwise. It’s not about the classic era of rock & roll. Not essentially. It’s about people, life, choices, freedom versus control. It’s about artistry. It’s about what can happen when a fertile ground for creativity spontaneously occurs and is acted on. It’s about the message.

We began this project to explore a subject that was too big to fit into the memoir What It Was: Growing Up When the Music Mattered (HERE). We touched on it in that book and had to put it away for a later time. There was too much to say about it, a lot to learn, any number of people to interview.

That time arrived and we’ve been hard at it. It’s been a lot of work. Maybe we’re too young for it. 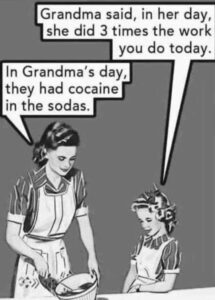 Freeform radio played the curatorial role in making what came to be known as the classic era of rock & roll music. Without it, that period of absolutely staggering creativity might never have happened. A lot fewer people would have known about it and had the pleasure of being there when it happened. Freeform radio changed the music business and enabled the counterculture to dominate popular culture for years to come.

For all that it accomplished, it was a brief, brilliant, and ultimately doomed experiment in broadcast media, a radical approach to treating the audience like the true beneficiaries of the public airwaves. In its short lifespan, a staggering body of precedent-setting work was achieved. It was one brash gasp of free expression on the FM band. It was unique in the respect it paid its audience. And it was exactly what the new generation of creative musicians needed to succeed. By playing the curatorial role in bringing the new music to the public, freeform radio became the critical component in creating that foundational era of our culture.

A few daring custodians of the public airwaves prioritized the audience and the public good in that storied time. Some of them were courageous and visionary. Some were merely desperate. Whatever took them there, it wasn’t to last. Doom was delivered by media corporations that bought them and turned them into propaganda mills shilling for advertisers. Before they did, freeform opened the airwaves to innovative musicians who were ready to change the face of popular music. All they needed was access.

In its time, freeform radio brought that great music and all those innovative bands into the public consciousness when no one else would give them airplay. It gave those musicians the exposure that made their music known to a loyal and discerning audience that was hungry for more. It was a custom atmosphere that was perfect for the times.

On these few very influential stations, the unofficial underground radio network, there was a place where it all came together in a new, inventive, and highly productive way: the songwriters who wrote the music, the bands who played it, the record companies that produced it, the stations that broadcast it, the promoters who booked the concerts, and the huge audience of fans who made it the soundtrack of their life. And they thrived.

Creativity was the calling card. Freeform radio was the facilitator. There’s never been anything like it before or since. It’s a tale worth telling by the people who were there. 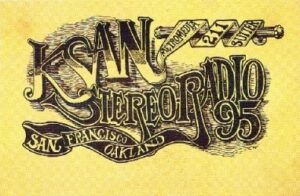 That’s the elevator pitch. We’ve indeed had the pleasure of talking to many of the people who were there and made it happen. Yesterday we interviewed Tony Kilbert, the famous TK, whose experience in radio dates back even beyond his first commercial gig at KSAN-FM, Jive 95, in San Francisco, where Tom Donahue hired him to do weekends in 1972 when he was 23 years old. TK is doing radio in Hawaii these days and, as he says, “the music still radiates, still matters, and still brings light.”

He’s one of several people we’ve talked to who worked with Donahue, widely considered the father of freeform, and all of whom spoke of him with something near reverence. What they said in common about him was that he let you do your thing. He’d challenge you, ask you to explain your choices, then he’d go with you. The essence of freeform. You are an artist. Say what you have to say. As Scoop the notorious KSAN newsman put it: 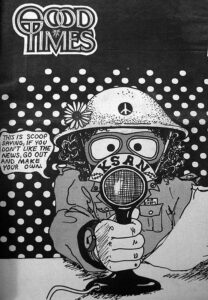 We have a lot more to bring your way about the saga of freeform radio as we build this archive. Bob Webber has finished the staggering work of converting an extensive collection of reel to reel tapes from the early Seventies into very crisp, clear, clean digital files. Thanks especially to Ham Agnew and Dan Fong, and to Sandy Phelps, Thom Trunnell, and Dane Calkins, we now have 50 hours of radio shows by Bill Ashford, Buffalo Chip, Brian Kreizenbeck, High Street, Jerry Mills, Reno Nevada, Phelps, Bill Szymczyk, Trunnell, and Harry Tuft. If you like music presented tastefully and respectfully, these tapes are sublime!

And, we now have begun editing a series of 33 Zoom interviews with people who were there when freeform was thriving and made it happen. People like Gail Ashford, Raechel Donahue, Charles Laquidara, Ron Middag, TK, several of the deejays listed above, and their successors Ken Freedman, Jamie Dell’Apa, and many others with insightful and often joyous observations about those times and the medium that gave it a voice.

The next step in that process is to slice and dice them into a documentary that tells this remarkable story, and also to post all the interviews as they were recorded in the archive, so you can hear what these very thoughtful people have to say about the experience of creating something classic. We may well podcast them, too.

Lots going on. Wonder if Grandma left any of that soda stashed somewhere? We could maybe use a sip.