A few people over the years have asked me how I became a columnist at The Denver Post at such a young age. It’s one of those right place, right time tales, but with enough curiosities to make it (hopefully) interesting.

Early 1968. You’re just back from the East Coast, with a detour to San Francisco. There’s really a lot going on. You’re digging it all and wondering what life holds for you next. Your girl friend, Rebecca Jane, tells you the Library at The Denver Post is going to hire a researcher. “I can do that,” you think to yourself.

The Librarian, Bob Inman, is obviously if not openly gay, which is not an easy thing to be those days. He really digs Rebecca Jane because she has no attitude whatsoever about his orientation. He thinks maybe you don’t either, so he grants you an interview. He’s cool, you get along great, and he hires you on the spot.

Now you’re this long-haired, freaky-looking guy (seen here with the late, great Tony Funches) working at the paper. You’re doing research and the reporters give you a fair amount of attitude. But the editors are trying to cover all these strange people and the odd stuff that is going on around town. They don’t know what to make of it. Nobody does. They see you and say to themselves, “He looks like one of them. Let’s send him to cover the story.”

So they do, and when you write it up (beautifully, you think) they go, “No, no, no. That’s not reporting. That’s editorializing. You’re supposed to be impartial. Objective. Keep your opinions to yourself.”

You say you’re not impartial. “There’re people being beaten up in the streets just for having long hair.” Where are you supposed to say what you have to say? You go around and around with them for a while and then, out of the blue, they decide to give you a column. Twice a week in a major metropolitan newspaper with a circulation of 600,000. The Voice of the Rocky Mountain Empire. 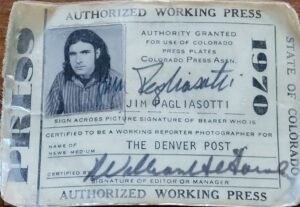 You’re 23 years old, the youngest columnist ever at the paper, and now the reporters really have an attitude toward you. But you get a desk in the entertainment section of the newsroom, which is pretty nice compared to the City Desk, where most of the ink-stained wretches are parked.

There are desks as far as you can see in this giant building that takes up an entire city block downtown. Every desk has a typewriter, a black rotary dial phone, and an ashtray, usually overflowing with butts and at least one cigarette or cigar smoking away at all times.

There is a haze of blue smoke hovering in the air, the sound of typewriters clacking, reporters shouting into telephones, editors yelling, local hotshots from one sector or another of the power structure raising holy hell about coverage they didn’t like, and overlaying everything was a film of ink from the presses on the other side of the building that cranked out all those papers every day. Ink stained, indeed!

You look around and say to yourself, “Wow! This is really wild.” You get paid to hang out and write about what you’d be doing anyhow. You get a ringside seat at this incredible moment in time. And best of all, you have press credentials, the very best back stage pass there is.

You can cross police lines, fire lines, go back stage at concerts, get access to pretty much anywhere a story might be found. People look at you sideways, especially the cops, but you show your press pass and they let you through. What a deal.

For Rebecca Jane, though, it’s not such a great deal. The newsroom is hiring photographers and she’s a good one. Has a Nikon with a couple of different lenses and a great eye for composition. She applies for the job and they laugh her out of the room.

“You can’t do this work,” they say. “You’re not strong enough to climb a ladder at a fire to get the shot. Swing over a fire escape, hang by your arm, and get the shot. This is man’s work.”

About half of the reporters and photographers do the three-martini lunch daily, and barely find shirts large enough to cover a prodigious gut. Not exactly ripped are they so there’s reason to doubt what they say. But it is the Sixties after all and as James Brown says, “It’s a man’s world.”