What do you think about drugs? Good, bad, indifferent? Chooser, user, abuser? Never, seldom, often, every day like clockwork?

Maybe you take medicine for your heart. Maybe you like wine. Smoke a little reefer. Coffee may be your fix each day, or meth may be your pick me up because after all it’s cheaper. Perhaps you lounge in an opium den or shoot heroin in squalid surroundings. Your shrink prescribed a daily dose of Klonopin to calm your nerves or some Halcyon to get you through the night. Perhaps you need a little painkiller for arthritis or an aching hip joint. Ibuprofen or maybe even OxyContin. There are all sorts of drugs and lots of reasons people use them.

In my lifetime, drugs have had a fascinating narrative arc. Everyone used to smoke cigarettes. Now they don’t. Aspirin was for pain, iodine for cuts, liquor was the sedative of choice. But the pharmaceutical industry came on like gangbusters and the counterculture with its own pharmacopoeia grew very large, too.

When the Stones in 1966 sang a song about Mother’s Little Helper, they were on to something. Valley of the Dolls, you know. There’s a story here. Tranquilizers for mom. Very nice to have. Get you through the day. Blissfully. And a couple of stiff martinis for dad when he gets home from work, just to unwind, you know. Then came ADD. Ritalin for those over-amped children who were driving you over the edge. Dope for the kids. Dope for the adults. Dope for all. Drugs for every occasion. Doctor’s orders.

We think about addiction to drugs in terms of heroin users and alcoholics anonymous. We’re sold the idea that “drugs” are different than pharmaceuticals, that “pushers” sell drugs and “doctors” dole out medicine. Drugs are proscribed, medicine is prescribed. 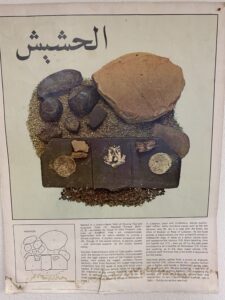 Marijuana, hashish, kef, peyote, psilocybin, mescaline, opium, coca, betel, alcohol, nicotine, caffeine are among the many naturally occurring psychoactive agents that have accompanied humankind through its evolution, some of them nearly from the beginning of our time. All are proscribed in this country but the last three, at least one of which, nicotine, is proven deadly, and one of which, alcohol, has probably wrought more mayhem in society than all the rest combined.

Then there are the pharmaceuticals, way too numerous to name. Watch the nightly news if you want to catch the latest and the greatest: drugs for tragic maladies like Restless Leg Syndrome; or that known simply as the Little Purple Pill, rising from the meadow of flowers like a butterfly to calm your every frazzled nerve; pills for your heart, stomach, liver, kidneys, bowels, sphincter, prostate, bladder, ears, nose, throat, sexual organs, your nerves themselves, and then, of course, a vast variety for your brainpan. And a vast variety for pain, everything from aspirin to opiates. All are prescribed. How many would you like today?

You suspect the proscribed market is very sizable, as well. Marijuana, which has become legal in one manner or another in 25 states and Canada, is already a $multi-billion market in its legal form alone. Whatever you may think of drug consumption, and however you define what’s right or wrong about it, there is clearly a whole lot of it going on. People like their dope. Okay?

The growth in consumption per capita of drugs of every sort has grown exponentially from the post-War era to modern times. Recreational drugs have become far more widely acceptable. But it is the growth in prescription drugs that has skyrocketed. Big Pharma has done very well, indeed. Something has to sooth that rampant ego.

We all have our Jones, it seems. Whether yours was gathered and fed legally or whether you played on the black market was the issue at hand. Big Pharma and its lackeys in the health care industry were on a roll. That was just business reaping ever greater rewards. No reason for caution there.

The War on Drugs, of course, was focused on the illicit users, and virtually no stoner was left unturned. The trillions of dollars lavishly spent in that cynical, calculated exercise to suppress votes (HERE) showed many an accomplishment: the dramatic growth of the prison industry, a per capita rate of incarceration that vastly exceeds any other nation in the world, and the incenting of vigorous criminal enterprises here, in Mexico, and South America. Not to mention the poppy fields of Asia.

Over time, it succeeded in creating a terrorist nation on our southern border. And more of them further south. It funded political suppression and political insurrection at different times in different places. It underwrote nearly every urban police department in the U.S., supplied them with surplus military hardware, and turned them into inner city combat units. It even subsidized the C.I.A. and put the air beneath the wings of Flying Tiger Airlines. It had many uses in many different places where the government wanted to apply some pressure.