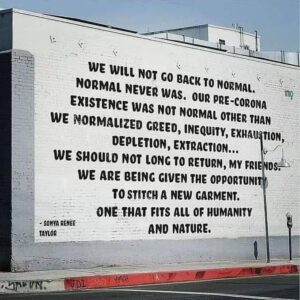 Do you ever get the feeling we might be reaching an inflection point? Not because the sky is falling, although it often seems to be when we wake to another day covered in ash. Not because strongmen (and they are nearly all men) in the service of plutocrats are once again the dominant political force world-wide, exploiting the angry poor and forging it into hate. And not because a pandemic is sweeping through the entirety of humanity with no apparent end to its devastation in sight.

Those are issues of global consequence, but, I mean, what’s new? Not crises, not gloom and doom, not the coming apocalypse. Those sensations of the boogymen approaching have littered the near horizon since people first began to speculate about the future. They’ve always scared us but haven’t moved us. Not nearly enough.

No, what is different about this possible flex point is that the entire world and all its people simultaneously have undergone a change in the normal way of going about their lives. The COVID-19 pandemic has altered life everywhere in remarkably similar and similarly profound ways. And people are thinking about what’s different.

It takes something earth-shattering to get our collective attention, to break us out of our habits, to get us to look anew at what we do daily with so little awareness of how and why we might do it differently. Change mostly happens around the edges. Until the center is pulled apart, not much is really different about our ways and means. 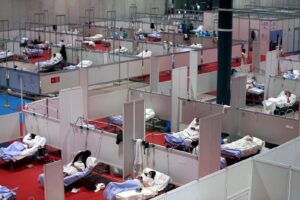 But now we have a shared world of hurt, the death of millions, healthcare stressed to the breaking point, global economies thoroughly disrupted, and a threat of wide-spread poverty and homelessness so profound that staunch capitalists funded socialist solutions without hesitation or the usual political posturing. “Free money.” Imagine.

It falls apart; the center cannot hold. Some things are simply too big to gloss over with the usual spin. In response, at least among the wealthy nations, where a blind eye by policy-makers is the common response to daily incidents of impoverishment, an actual safety net was created, brief though it may have been. And, for that short window of time, in very obvious ways, it worked! In a time of great crisis, poverty was reduced, at least briefly HERE.

While the rich got even richer, as they always do, the rest of us were in a sort of suspended animation. Jobs simply vanished. Months passed with no earned income. Many of us were dependent on government support, checks that seemed to arrive out of nowhere and unemployment benefits for even the traditionally forgotten self-employed. It was a time unlike any other. The government gave money to its citizens this time instead of just to its banks.

However temporal the limit of its success, the effort gave us a vivid demonstration of what is possible if we’re willing to rethink and then rearrange our priorities. When we put money in the hands of people who need it most, those vast numbers of the population who struggle to provide even basic necessities, that money gets spent. It circulates. The value of the currency is multiplied and everybody benefits.

It not only provides relief from the most critical threats of poverty, starvation, and homelessness, it also greases the wheels of capitalism and keeps the machine humming, not just for the rich but for everyone. It continues to feed the rich, who will continue to get richer, but taxing their gain in net worth can prime the pump and keep it flowing.

“Oh, god,” say the capitalists before we go any farther, “he’s going to talk about redistribution of wealth.” Their antennae are quivering. “Here comes the socialism screed.”

But no, we’re capitalists here, born and raised. We recognize the failures of communism, the limits of socialism, the natural fit at least in the U.S. that free enterprise has to the American way of life. Competition and all that. We’re talking about rethinking and rearranging, not about doing away with. But we are going to talk about redistribution.

Let’s be clear about that third rail of capitalism, the idea that all money earned belongs to the earner. Taking it from the rightful owner and giving it as a handout to welfare queens is an unacceptable redistribution of wealth. You may have heard that rant. That’s the sacrosanct principle with which we want to tamper. 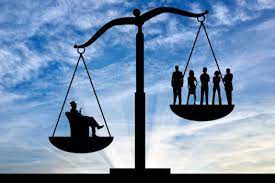 Wealth is always redistributed – it flows from the poor to the rich. That’s where the money comes from and where it goes. It is redistributed upward. And we accept that as the nature of the beast. We’re okay with it so far. What needs to change is simply this: money needs to be recirculated regularly. And that isn’t the current state of affairs.

Fewer and fewer people are accumulating more and more of the money that is generated by our capitalist system. They are not creating jobs with it, not investing it in new products and services, not strengthening the system, not raising the standard of living, except their own. They are hoarding it. Let’s quit pretending otherwise.

The solution is not to increase income taxes on the rich. Income tax is the problem, not the solution. It is tax on workers, not on owners. The truly rich among us have long since figured out how to avoid income tax. We should stop taxing income and instead start taxing assets.

U.S. billionaires got nearly $650 billion richer during the pandemic HERE. They paid very little in taxes on their gain in net worth, precisely because very little of that wealth comes from income HERE.

Yet President Joe Biden continues to bang the drum for increasing income taxes on the rich and corporations:

says Biden “went after big corporations and wealthy Americans while promoting his economic agenda that congressional Democrats are working to get across the finish line.” He said, “Let me ask you this, where is it written in that all the tax breaks in the American tax code go to corporations and the very top? I think it’s enough, I’m tired of it,” and he “reiterated his calls for big corporations and the wealthy to pay their fair share in taxes, saying” it is “long overdue.” Biden said, “I’m not out to punish anyone, I’m a capitalist. If you can make a million or a billion dollars, that’s great. God bless you. All I’m asking is you pay your fair share, pay your fair share, just like middle class folks do.”

Those are sentiments we share but a strategy we question, so much so that we can’t help but wonder if this isn’t yet another way of avoiding the real problem with fair taxation. This is nibbling around the edges of the problem. To get at the center of it, we must stop taxing income and start taxing assets.

Here’s a proposal. What if we stopped all income tax collection? Set a baseline level of assets above which taxes are levied? Any increase in assets above, say, $2 million, are taxed at 50%. If you were worth $2 million last year and you’re worth $3 million now, you owe $500,000 in tax. If, like Jeff Bezos and Elon Musk, your combined net worth in 2020 increased by $217 billion, your taxes owed would be $108.5 billion HERE.

What would we do with the tax revenues? Let’s shrink government rather than grow it by eliminating all these agencies for shaming the poor. Get rid of welfare, aid to dependent children, food stamps, and all the rest of our government infrastructure that treats the poor as an inevitable, embarrassing calamity of free enterprise.

Instead, let’s use the money to provide every individual a basic income. Money to spend as each person sees fit. To pay rent, buy food, acquire reliable transportation. And spend it they will. The pump will be primed not once, not because of an emergency, but as a way of life.

Make as much as you can and will, free enterprisers, and know that more will come your way, year after year, because you both fattened your assets and supported the sustainable well-being of the community from which it derives. If you truly want smaller government and less fettered capitalism, let’s agree to be done with this Rube Goldberg system of monetary policy. Let’s create a playing field for American life and livelihood that is focused on creating a truly healthy and vibrant community. It can be profitable.

After our relentless push to “make the world safe for democracy” and $trillions spent on failed “nation building,” are we ready to try something new? Are we finally at the point where we might build a world-class example of capitalism that is focused on the unfettered well-being of the community as its raison-d’être? HERE.

As the entire world struggles with a pandemic and wonders what comes next, what the world will look like as we go forward, a United States which rechannels its system of wealth creation for truly humanitarian purposes might be a model that would rally the world’s admiration. At an opportune time, no less.