At New Northwest, we love probing sacred cows, giving them a poke in the ribs, seeing which ones stand and which might fall with just enough of a push. All those sacrosanct, inviolable concepts, adages, and tenets we blithely accept because they are repeated by one and all so assuredly so often. Sometimes they are less resilient and stable than we are led to believe.

Think of the tenets of free enterprise as a for-instance. Growth is good. If you’re not growing, you’re dying. Revenue increasing quarter over quarter. Burgeoning productivity. Consumer activity flourishing. All those signs of a healthy capitalist enterprise. Right? The engine of consumption is humming.

Our economic system, a tried and true but tired old war horse that is increasingly confounded by the planet on which it depends. For resources. For stability. For livability. Maybe even for survival. Well, then, what about post-growth? Is it an antidote for late-stage capitalism?

There is a theory postulated that climate change will be inexorable if capitalism continues to consume to expand. The exploitation of resources for the purpose of producing goods and services as the driver of an ever-growing economy will condemn the earth to exhaustion. We are passing the point at which the goose can continue laying eggs, golden or otherwise.

So says a serious study of the reality we face in meeting the Paris Agreement goals for mitigating climate change. Here’s what a distinguished group of European scholars see as the issue:

“Existing scenarios start with the assumption that all nations should continue to pursue economic growth for the rest of the century, regardless of how rich they have already become. Growth is an unquestioned norm (1). This creates a problem because growth is projected to drive a significant increase in energy demand over the coming decades, making it more challenging to decarbonize the economy (2). To reconcile growth with the Paris Agreement goals of keeping global warming below 1.5 °C or 2 °C, existing scenarios gamble on dramatic technological change, particularly negative emissions technologies and productivity improvements big enough to drive absolute decoupling of gross domestic product (GDP) from energy use.

“In recent years, however, scientists have raised substantial empirical questions about the risks of negative emissions technologies and the feasibility of achieving sufficient absolute decoupling, warning that these approaches may not be adequate to address the crisis we face (3).

“Recognizing these challenges, ecological economists have proposed an alternative approach. For high-income countries, continued economic growth may notbe necessary. Instead, they can adopt post-growth policies, which are designed to keep economies stable and support strong social outcomes without economic growth (4).” 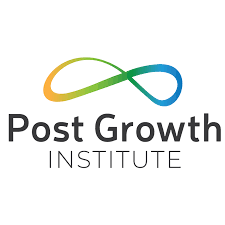 The Post Growth Institute is an international organization with leadership residing locally in Ashland, Oregon among many points globally. We are intrigued by the work they do because so much of it is counter-intuitive. Less is better. New is unnecessary – we can do well with what we already have. That sort of coceptualization.

Whether or not you buy into their way of thinking about the future and the problems we need to solve to get there, we are reaching a point of no return, according to the 195-nation report of the Intergovernmental Panel on Climate Change. If a consensus by that many nations on any subject isn’t sobering enough, the prediction of irreversible climate catastrophe on the near horizon might get our attention. Read the conclusions at IPCC.

One thing that seems irrefutable is that change is required, and it will not be little adjustments to our current way of doing things. It will be systemic change, in how we generate energy for heat, cooling, and lights; how we provide transportation: and. how we conduct our economy.

Maybe we need to reconsider the ultimate purpose of that economy: should it be growth and further enrichment of the successful, hoping somehow that new technologies blessedly will allow even further exploitation of the environment and its resources, or should it be the well-being of our communities and Mother Earth that becomes our priority?

If the latter, will we have the courage to turn some of those sacred cows out to pasture and get on with ways of thinking about goals worth pursuing that are contemporary with our times?