Are you willing to change your diet to save the planet? What if you learned that farts are releasing as much methane into the atmosphere as oil & gas exploration? This is classically “food for thought.”

In an article about the Paris Accords by Henry Fountain in today’s New York Times Digest (no link available), climate researcher Michael Clark of Oxford University in England observed “there is no single silver bullet” that will limit global temperature increase to the goal of 1.5 degrees Celsius. The focus on “net zero” carbon emissions from petrochemicals, he and his colleagues agreed, is unlikely to occur nearly as fast as needed.

“Rising greenhouse gas emissions from worldwide food production will make it extremely difficult to limit global warming to the targets set in the Paris climate agreement, even if emissions from fossil-fuel burning were halted immediately,” they said. 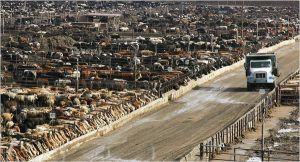 Animal flatulence, particularly at feed lots where cattle, pigs, sheep, and other creatures are fattened on unnatural feeds en route to the dinner table, is a major source, some say as much as 30 percent, of all methane release.

Combined with other big agriculture practices, such as clearing land and deforestation for farming, and the massive use of chemical fertilizers and pesticides, which release major amounts of carbon dioxide and other pollutants, our food production system is a major polluter, equivalent to nearly one-third of total global emissions.

“But they said that meeting one of the targets, limiting overall warming this century to 1.5 degrees Celsius, or about 2.7 degrees Fahrenheit, could be achieved through “rapid and ambitious” changes to the global food system over the next several decades, including adopting plant-rich diets, increasing crop yields and reducing food waste.”

It appears that our efforts to curb global warming and arrest climate change need to include changes in our personal energy supply as well as in power production. Big agriculture joins big oil as an object of our attention.

Please don’t think that a vegan diet is the only hope, however. There is a comprehensive look at that issue here.